My “other” hobby besides quilting is swimming and generally being outdoors. I love the Las Vegas heat, but I also like to stay cool, so earlier this summer we decided to get a pool in our backyard! (Click here to read part 1 if you missed it the first time around). So far we have a giant hole in the ground and it is HUGE!! So let me tell you more about that…

Before they were able to start digging the hole for our backyard pool, they excavators had to first remove everything that was there to begin with. In order to get those tractors into the yard from our super skinny side yard, we had to have the gas meter removed because it stuck out too far. 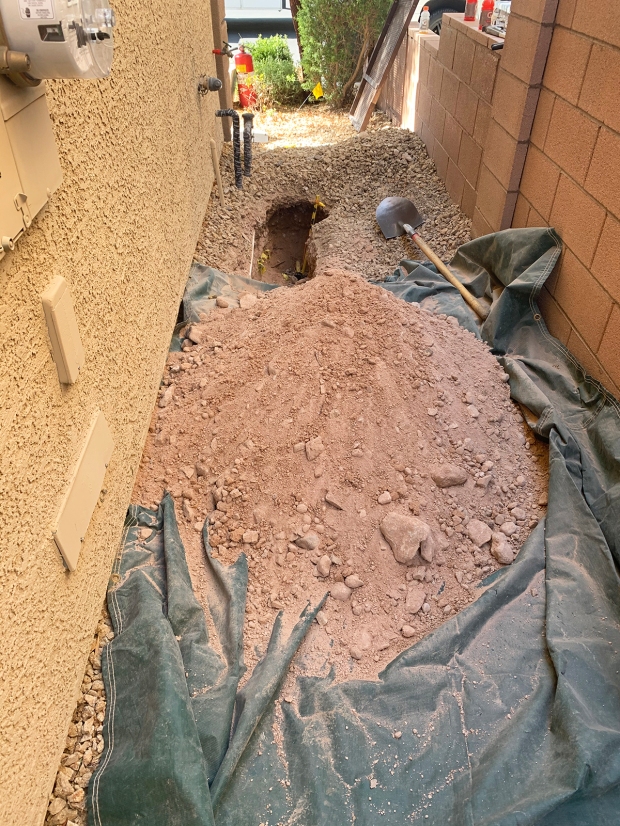 The gas company came out and removed the meter for us which meant no hot water for 2 weeks while the excavators dug the hole!! But we are so excited about this project that we didn’t care. We had some very accommodating neighbors and family members that let us use their shower, and we ate out a lot so we didn’t have to do any dishes.

It took 3 days to completely destroy and level our backyard, including jackhammering the entire concrete patio that was there to begin with. It was fascinating to watch them work and I got a great view from my bedroom window on the second floor of our home.

Once the backyard was clear, the digging began!! It took a total of 8 days to dig a huge giant hole in the ground!! Here are some progress pics: 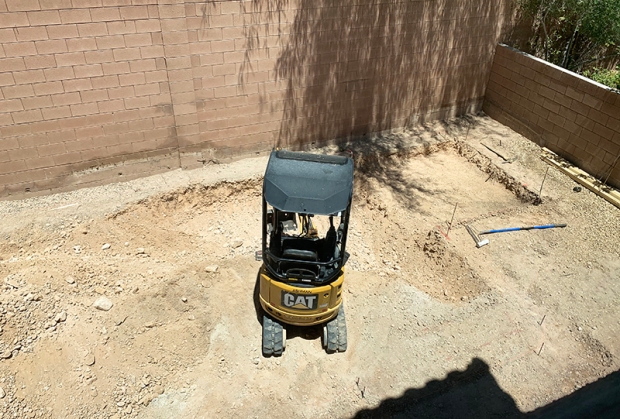 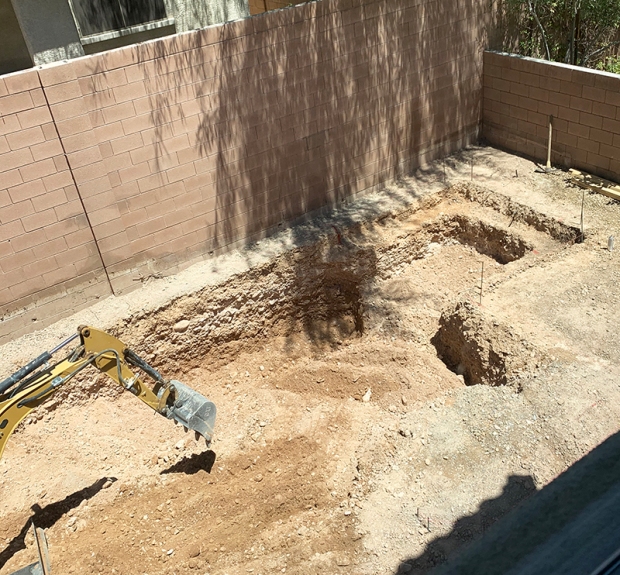 My Daughter in the deep end (6′ Deep)

The Hole is Done!!

While this was all going on, we got to choose our tile and flooring colors. I want a very neutral backdrop that will contrast with the pretty teal/blue water color that I want. My inspiration for for the “decking” areas surrounding the pool was a friend’s decking that she recently completed. It’s a very pretty gray/tan travertine tile and I fell in love with it as soon as I saw it:

Just like choosing fabric colors, we took the samples outside to see what they’d look like in real daylight. The square below is the travertine tile that will be the outside flooring. The rectangle tiles will be along the water line and the raised wall along the back of our pool. I was deciding between the gray and the tan, and I decided to go with the tan because it seems to blend better. 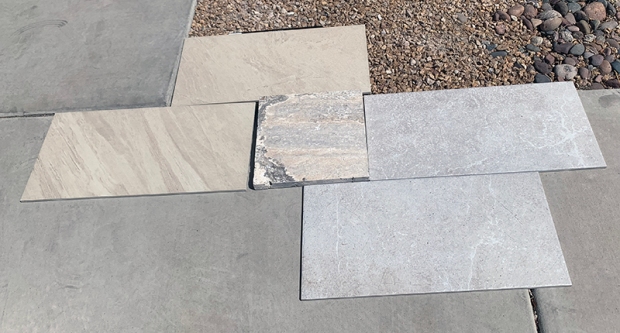 For the “plaster” which is on the sides and bottom of the pool, we chose to go with a pebbletec finish which is very durable and can give the water a lot of color. We chose the deep blue/gray color (circled below) which will produce a very pretty deep blue/teal water color. Thanks to youtube and internet research, I was able to look at a LOT of example pools with different finishes!!

We also finalized the landscape plan which will be very simple: colorful vines and bushes along the back wall and a couple of tall bushes behind the spa. Not shown is the patio cover that will be replaced along the back of the house, giving us plenty of shade The yard will be mostly pool and decking, but it will give us plenty of room to relax and enjoy!

Now we are in a holding pattern, waiting for the rest of the equipment to arrive. Next, they will pour the concrete – called shotcrete – and then finish it all up hopefully by the end of next month. I can’t wait!!

During this crazy long stretch where I’ve been working from home and not traveling, I came up with the hair-brained idea that we needed a backyard pool! We are in Vegas. We are hot. We need to cool down. But mostly I’ll be home over the next few months so I can stay on top of getting it done! Here’s a digital rendering of what our pool should look like when it’s done:

We actually made a few slight tweaks to the design after these drawings were made, but it’s pretty similar to what’s shown here and we are super excited about it!!

The start of an Idea

If you live in Las Vegas, chances are you either have a backyard pool or know someone who does. Shortly after we moved into our new home last year, our next door neighbors put in a pool in their yard. They’ve been super generous in allowing us to use it, but after the pandemic hit, I began thinking what our yard would like like if we had one built, too.

I was pleased that I was able to use Electric Quilt Design software (EQ8) to come up with the rough sketch shown below. But even before that that I spent several days chatting with my husband Jason about what we would want in our pool.

We both really like to swim for exercise, but knew that our yard wasn’t big enough for a lap pool. So after a bit of research, we discovered this device called a “fast lane” by Endless Pools. It basically creates a current in the pool, allowing you to swim in place continuously. We knew that we had to include that if we were going to make this pool idea become a reality.

Next,  I started asking a bunch of friends which pool companies they used, and I was referred to BYOP (Build Your Own Pool) of Nevada. (FYI this is NOT an affiliate post – I just want to share about my experience as it happens). The clincher was when I asked them if they were familiar with they fast lane idea and they said yes they had installed those before.

So just like I tweak my quilt designs over and over to get them just right, we worked with BYOP to perfect our pool design, That included figuring out how to incorporate the fast lane device and preserve a pretty pool aesthetic. It will be recessed as shown below and covered with pool decking so that it doesn’t stick out into the pool itself.

So the hardest part about the whole experience is that it will take a total of 3-4 months to install. I jokingly say it will be done just in time for winter, LOL!! But we did opt for a heating unit AND a spa – so it will be functional year round. Christmas day swimming anyone??

First we had to submit our plans to not 1, but 2 neighborhood HOA’s. Then we had to secure permits for the construction. Fortunately that all got approved relatively quickly, so now we can begin excavation soon. That’s where they basically destroy our current backyard and dig a big hole in the ground.

Once the design was finalized, the pool company came over and marked up the yard so that when the excavators come, they’ll knno exactly where to dig.

As we were finalizing the design, I used bricks from the yard and empty fabric bolts to visualize how big the areas of the pool would be. It was actually pretty fun to see my idea begin to take shape!

Below are the construction lines for our “wet deck” – a trend that I’ve seen in newer pools. It’s like a suntan ledge where you can put a chair and umbrella in the water or dangle your legs into the pool while sitting in just a few inches of water. It will be a great play area for future grandchildren, too (not that there any on the way anytime soon, but I’m just sayin’ it’s good to be prepared…)!

The Start of Something Good

Because we decided to cover the entire non-pool area with the same tile and decking, the first big project was to dismantle our covered patio so that they could remove the concrete that’s already there. The cover will be reassembled once the pool is in place. Here’s the before shot:

Below is our poor house with no more backyard shade. So sad, but at least we know it’s only temporary!! It’s kinda crazy how small our yard is, but in the future we will just refer to it as “swimming pool” room, LOL!!

So, in the meantime while I wait for work to begin, I will cool off the best way I know how – with a portable pool and some lounge chairs in the shade. I’ll post another update in a few weeks, when things really start happening. After all, it’s been a great distraction, and something to keep me occupied in between sewing sessions.

Stay cool out there, friends!! 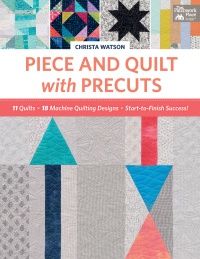 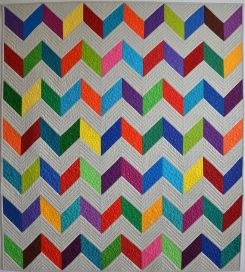 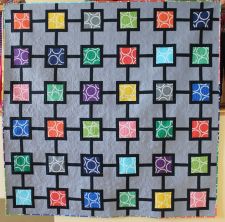